I love my EBible software. When I am in Billy Ray’s room waiting for him to go to sleep I often do searches about how I am feeling. The other night I did one for “weary” because I was.

Several comforting scriptures came up in my search but one that surprised me. I never really think of God as becoming weary in fact in Isaiah 40:28 it says that he never faints or grows weary. So when I read Isaiah 43:24b (NKJV) “But you have burdened Me with your sins,You have wearied Me with your iniquities.” It caused me to reflect on it a bit.

In the verses before just before this one, God had been saying that Jacob and Israel failed to call on him. He felt rejected by their failure to maintain closeness. The weariness came out of iniquities that probably wouldn’t have happened if they had stayed in touch with the Father.

I think there are some similarities to our reactions to our children. We do get tired and even weary in attempting to understand and care for our complex children. Like the Father we don’t faint and get so weary we stop caring for them. We continue to love them with the unconditional love of the Father.

Billy Ray demonstrated that love to me in an unexpected way. Mother’s Days had always been hard for me because of my infertility. Billy Ray’s adoption healed that pain. When he was a teenager we were driving home from a very special Mother’s Day service at church. I tried to explain to him that Mother’s Day is special to me because I am his mother and how hard it had been before him. He punched me really hard in the shoulder. I was crushed.

Later I thought about that. Despite his rejection of my sharing I loved him still and understood that he was not able to grasp what I was saying. The Father’s love for us is so strong than even though we fail to turn to Him in crisis or reject His help in multiple instances, He loved us enough to send His own son that we might be saved.

It is comforting to think of the Father being able to understand weariness and our human impatience. 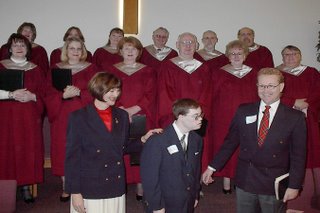 Gentle Reminders in Time of Trouble

If you are the parent of a child with special needs chances are good you have been through times when it seemed there were just no answers for your child. We are there AGAIN. There are health issues though we have a medical team who works very hard. The in-home support staff left a little over a week ago and we are back to trying to do it all ourselves.

The Lord gave me the Lighthouse Concept a long time ago yet when we go through survival with our kids it is easy to lose focus at least temporarily. He has a way of reminding me where the best help can be found.

One of those reminders came a few days ago. Billy Ray has been sick with severe sinus and ear infections plus the abdominal problems the medical professionals have been trying to resolve for over a year now. With him being ill and not having support staff I have not been in the Word and having quality time with the Lord as I like to.

In desperation, I went to the Lord and just acknowledged that I didn’t know how to help my son. While thumbing through the Bible to the passage I was looking for my eyes caught John 8:12 a verse I love “***I am the light of the world. Whoever follows me will never walk in darkness but will have the light of life.”

The Psalmist cried out “But, Lord, don’t be far away. You are my strength; hurry to help me.” (Psalms 22:19 NCV) The Lord is never far away but when we get in survival mode with our children’s problems sometimes we take our eyes off Him. The Light (wisdom, insight) is there waiting to help us if we turn the connection toward Him.