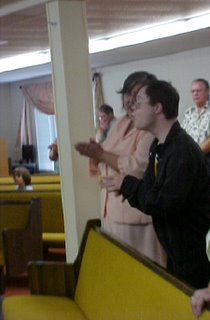 I told my Pastor when I started this blog that I wanted to try to capture Billy Ray enjoying the worship music for you. If you have been following my regular blog you know that it has been crazy so I hadn't gotten it done. Pastor Lighthill met us at the door this morning and asked if we still wanted to do the pictures. He handed his camera to Jeff Fields who snapped these pictures.

It is very difficult to catch the essence of Billy Ray's joy in a picture. A former pastor used to say that Billy Ray is the only one who dances in church. He bounces up and down and claps sometimes even to songs not intended to have clapping. He has a true sense of worship but it is in his own way. The second picture shows his expression but doesn't catch his clapping. 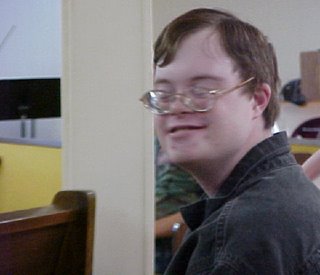 Billy Ray's love for music began from being rocked by Mom and Grandma Daisy. We sang Sunday School songs and old hymns to him. Additionally, a then young pastor, named Virgil Askrin was our pastor and led the congregation in lots of little choruses that BR still sings today. If you are reading this on Bend Blogs, you may know Pastor Virgil since he is the Pastor at Bend Nazarene.

Here is another picture of Billy Ray singing taken at Soul's Harbor Nazerene where we attended before moving to LaPine in December 2004. 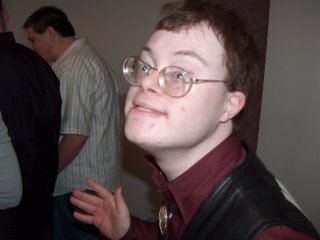 It is my intention to write a post this week about the ways our little LaPine - Grace Fellowship Church has been like the church in Acts to us. It is a story I want to share as an example of how others can support families in their churches.

Billy Ray has a colonoscopy on Thursday so prayers would be appreciated. He will have to be sedated which is always a concern after last summer's ventilator experience.

I know that Billy Ray is an adult, but when I see these pictures I think "How precious it is to see him praising God!" He looks so happy! My 4 year old with pdd loves the song "This Little Light of Mine." It brings me joy to watch him light up with delight and sing. Im sure these pictures of your son bring your heart joy as well!