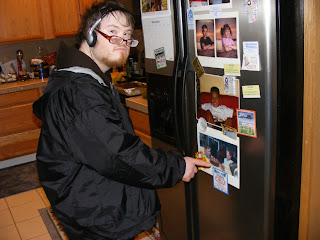 On Saturday when the Pastor was snapping pictures for me he caught this picture of Billy Ray proudly snowing a pretty worn out picture of his special friend "donnagert" as he calls her (he often adds something to people's names).
Donna and her husband Max are "snowbirds" so they are gone during the winter months but she maintains her relationship with Billy Ray by cell phone. A conversation with Donna never fails to perk him up. While they are in town she makes him high fiber cookies with helps with the bowel issues common in Autism.
This picture was taken in September 2006 when friends of mine from Salem were coming for a barbecue and I had invited several of our church friends. It happened to fall on Donna's birthday. They wanted to bring something and I suggested that her husband just get a cake for her birthday so Billy Ray could blow out the candles for her. He is not big on cakes (at least not then) but he loves the candle blowing part. The picture is blurring so you can't see much of anyone but Billy Ray and Donna but he loves the pictures. He has two copies one he carries around a lot and this one on the refrigerator. He has been showing several ladies the picture when they were bringing meals since I have been ill. He is so proud of his Donna.
Donna makes such a special effort to understand what Billy Ray likes and how he needs things to be. She inquires a lot and this has given me a chance to teach her all things Billy Ray. During my recent crisis this was a great comfort for me because I realize she probably knows Billy Ray better than anyone outside the family right now and would be available to advocate for him if I wasn't.
I have written more about this relationship in my new book that comes out next Fall (if I get it finished and to the publisher in time) so I won't elaborate here. However, I want to make the point that there is lots of things that can be done to support families with special needs that don't take a lot struggle.
Until next time,
Peggy Lou Morgan
www.peggyloumorgan.com
Posted by Peggy Lou Morgan at 10:49 AM